The Virginia Creeper Trail had its beginnings as a Native American footpath and was later used by pioneers and explorers such as Daniel Boone. The trail itself runs on a rail right-of-way that dates to the late 1880's.
The railroad began in Abingdon, Virginia as the Abingdon Coal and Iron Railroad Company. It was believed that the land in the area around Abingdon was rich with minerals such as coal and iron. During the late 1880's the rail company began to secure the land rights to build a railroad from Abingdon to Damascus. By the early 1890's not one rail had been laid on the partially cleared rail bed. After of thousands of dollars and man hours too great to count, the railroad company was broke. In the 1894 the company's assets were taken over by the Virginia Western Coal & Iron Railroad Company.
Work on the railroad was slow and tedious. With many problems to overcome and after many delays the Virginia Western Coal & Iron Railroad Company also found itself bankrupt, thus leaving it's assets available and cheap.
Wilton E Mingea, a freight agent in Roanoke for Norfolk and Western Railroad knew about the high demand for lumber in the northeast and began work forming a new company called the Virginia-Carolina Railroad Company. The assets of the Virginia Western Coal & Iron Railroad Company were purchased, but this time the focus was on the rolling hills rich with timber. After two years of building bridges and laying track the Virginia-Carolina Railroad started running in February of 1900 when it's first train steamed between Abindgon and Damascus.
By 1912, the railroad was extended to Whitetop Virginia and by 1918 the line stretched 75 miles to Elkland, North Carolina (now named Todd, NC), and included more than 100 trestles. Villagers out picking blackberries or elderberries along the tracks watched as stacks of red spruce, freshly cut from virgin forests high atop Mount Rogers, rumbled by on flatbed carts. By the end of the decade the railroad had been extended to Elkland, North Carolina. During this time the Norfolk and Western Railroad had purchased partial ownership in the railroad which helped capitalize the expansion of the rail line.
The locals referred to the train that climbed eastward into the Iron Mountains as the "Virginia Creeper", a name taken from the native plant that grows along the route. A steam engine laboring up mountain grades with heavy loads of lumber, iron ore, supplies, and passengers was also a "Virginia creeper" in every sense of the word.
Damascus, Virginia was the largest incorporated town in this timber zone and saw rapid growth. Towns were built, businesses flourished and jobs were plentiful with the coming of the railroad throughout the region. Whitetop Virginia became to highest standard gauge rail station east of the Rockies to be serviced by a regularly scheduled train. At its high point, Whitetop had stores, a hotel, a doctor, a dentist and 500 residents. The Hassenger Lumber Company, which had built it's own town near the settlement of Azen, about 14 miles east of Damascus, closed its once booming business in 1928. With the stock market crash in 1929 the railroad depended on light passenger and freight service for revenue. Today, most of the signs of that prosperous period are gone.        By 1954 traffic had been reduced to one mixed train a day that kept up a regular schedule up and down the mountain. In1956 the last steam engine was retired from the line and replaced with diesel powered engines. The Norfolk and Western Railroad Company petitioned the Interstate Commerce Commission to abandon the line in 1974. The ICC decided in April of 1976 to abandon the Abingdon Branch effective April 1977. The last train ran on March 31, 1977. Removal of the track began that same year.
As the Creeper was shutting down in the summer of 1977 Dave Brilhart, M.D., a member of the Washington County Planning Commission shared an article with fellow board members from the Washington Post about making trails out of abandoned railway corridors. There were several successful “rail-to-trail” conversions in the early '70s. Inspired by these stories the Planning Commission along with several local supporters decided to pursue the idea. In early 1978 the U.S. Forest Service purchased the right-of-way between Damascus and Green Cove, a stretch of about 14 miles. The Forest Service planned a hiking/biking trail and was supported by local efforts to preserve a longer trail and so the Virginia Creeper Trail project began. The Virginia Creeper Trail between Damascus and the North Carolina border, except for a short stretch through Taylor's Valley, is part of the Jefferson National Forest and is administered by the Mount Rogers National Recreation Area staff.
Today this spectacular 34.3 mile rail-to-recreation trail attracts over 180,000 visitors each year from across the the United States and around the world who come to enjoy the natural, scenic beauty of Southwestern Virginia. They come to visit the towns along the Virginia Creeper Trail, to experience an outdoor adventure of biking, hiking, birding, fishing or just relaxing. 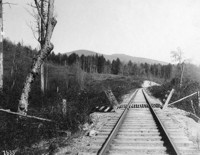 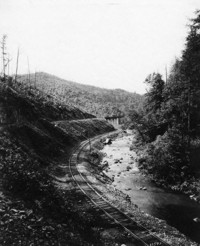 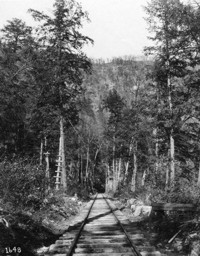